The Surfrider Foundation was founded in 1984 by a group of surfers concerned about ever increasing development in the Malibu area of southern California and the affects these actions were having on access and water quality at this renowned surf break.  Over the preceding years, the foundation has weathered many changes in leadership, but has maintained a singular focus on access and the health of our nation’s coastal resources.

During the summer of 2000 a group of forward thinking surfers decided to move forward with establishing a second Surfrider Foundation chapter in Texas.  A number of months earlier the first Texas chapter was chartered in Liberty, Texas near Houston (currently the Texas Upper Coast Chapter of the Surfrider Foundation).  The first organizing meeting was held at Scholz Beer Garten on Monday, July 24, 2000. 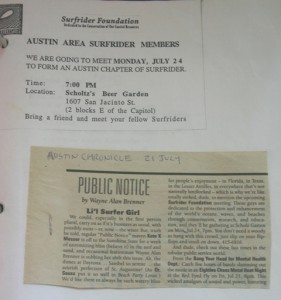 Public notice for the first organized meeting in Austin!